This is one of my recent eBay purchases. It’s in very good condition and it works. It may new a new power socket or plug on the PSU. Also came with tape leads.

This British computer was one of the most popular computers in Europe in the beginning of the 80’s. It was a small computer, which was a competitor of the Sinclair Spectrum. 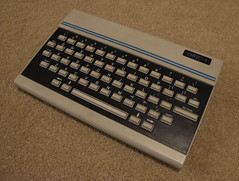 The two models (16 and 48) had the same technical characteristics.
A small plotter was available for this computer.

Notice that the sound chip was the same one used in the Amstrad CPC, MSX computers and Atari ST!

Its ROM was very buggy, & was later replaced with the Oric Atmos.

The text above, and photos were taken from old-computers.com

UPDATE : Power supply socket has been re-solderd and now is stable. The 0 key has also been fixed.