Skip to content
Home » Blog » Poll: Have you ever restored a vintage computer?

Built by engineer Tommy Flowers in 1943, the Colossus computer was the first digital, programmable, and electronic computing device. The machine was used by British code breakers during World War II to help decipher messages encrypted with the German Lorenz SZ40/42 machine. 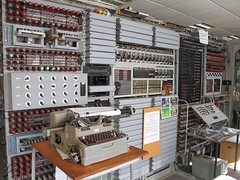 In 1993, Tony Sale started the Colossus Rebuild Project and in 1994 a team led by Sale began to recreate the massive machine at The National Museum of Computing at Bletchley Park in the UK. On June 6th, 1996, the recreated Colossus was first switched on, and by 2007 a fully functional replica of the Colossus Mark 2 was completed.

You can read the rest of the article at Poll: Have you ever restored a vintage computer?

One thought on “Poll: Have you ever restored a vintage computer?”