I found this interesting interview with one of the developers who had one of his games included in the Cassette 50 games tape. 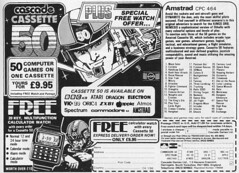 I’m pretty proud of this one. The authors of Cassette 50 – a notorious collection of primitive, mostly BASIC games advertised in seemingly every single ’80s game magazine, every single month – were mostly anonymous, uncredited kids, paid just £10 for their efforts. In 2005, thanks to a name left on a title screen and a few hopeful phone calls, I tracked down one of the games’ creators, now all grown up – and able to tell the story of how he (and his dad) put his little heart into that little game. Amazingly, he’d never even heard of Cassette 50: he’d sold his game, got his £10 and thought nothing more of it. My call prompted him to fire up Galaxy Defence for the first time in years, and show it to his son. Aw.

You can read the complete article here : Cassette 50: the interview

One thought on “Cassette 50: the interview”