Last weekend saw the first Vintage Computer Festival in the UK. It was hosted at Bletchley Park by The National Museum of Computing.

Over the weekend, I was volunteering for The Centre for Computing History who are a computer museum that is currently situated in Haverhill, Suffolk.

We arrived at Bletchley Park late Friday afternoon to find a empty room at the back of the mansion. I then realised we needed to fill this room with Amstrad and Sinclair computers!!! We then began the hard process of getting everything out of the van and into the building. 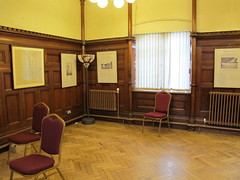 After a few hours of hard work, we were all setup. Myself and Jason were now exhausted. Unfortunately, we didn’t realise what the time was. This resulted in us missing the cut-off time to get on the A421 to our hotel. The A421 is closed every night from 10pm whilst they work on the new Bedford <-> Milton Keynes link road.

We arrived at Bletchley in plenty of time before the event opened. This gave us a bit of tinkering time on the display. Everything was coming together. Sadly, we missed Chris Searl opening the event. 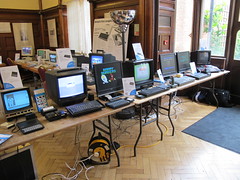 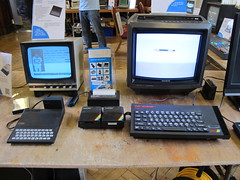 Once the show had been opened for a while, I had an opportunity to have a wonder around and take a look at some other exhibits. There were displays from RCM, Acorn World, Replay and many more. There were plenty of 8 and 16 bit machines to take a look at. Even noticed some newer 32bit machines too. One of the marquees outside housed many different models of Commodore machines including the Commodore 64 and Amiga.  Below, you can see someone playing “Shredz 64” which is a guitar hero type game for the 64. 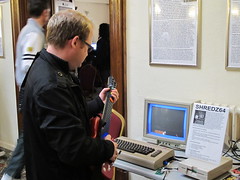 This is a Osbourne luggable computer. 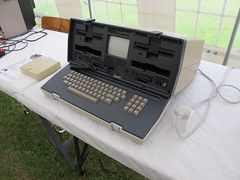 During the weekend, Pixelh8 performed twice. Whilst he wasnt performing he popped over to have a chat and take a look and play on some of our systems. He had a quick go on Sonic 1 on the Amstrad MegaPC and also a go on 3D Monster Maze on the ZX81. He is currently looking for a Dragon 32 to use in his musical compositions – can you help him? 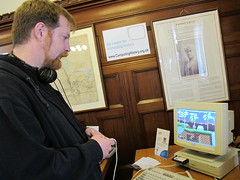 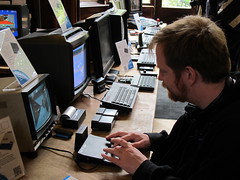 In the evening, OMD were doing a small performace in the mansion. The played  some of their classic hits, and two new tracks from their new album that gets released in September this year. One track was so new, Andy had to read the lyrics from a piece of paper! 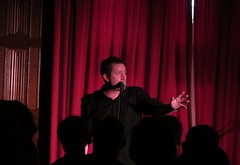 (In the style of the Big Brother narrator) Day 2 in the mansion. The second day of the event felt a bit quieter. I managed to have another wonder around. I bumped into John Honniball who was displaying his selection of UK101 computers. He also game me all the components I need to build my own Sinclair ZX80. 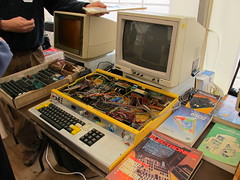 I managed to see 2 talks on the sunday. The first was Adam Bradley talking about supercomputing and Cray computer systems. His talk was very informative and very interesting. They dont make computers like they used to. 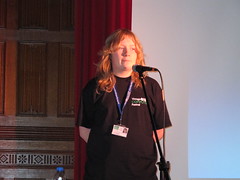 The second talk I attended was by Sophie Wilson. She was a key player in the early days of Acorn computers. She is also responsible for the ARM range of processors. She talked about many of her technical achievements during her life time including the Acorn Atom, BBC Micro and the ARM CPUs. She even talked about her new hobby of photography, especially about gigapixel images. 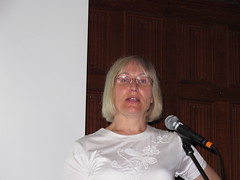 Once Sophie’s talk was finished, it was time to pack away and make our way home.

I will be uploading more photos of the event to this flickr group.

Lets hope the VCF returns to the UK next year! A big thank you to Simon Hewitt and the rest of the crew at TNMOC and Bletchley Park.

One thought on “Vintage Computer Festival 2010 – What a weekend!”